We are having a bad day, the cat and I.  There are several reasons for this: the state of the world – Syrian children and the lunacy of politics (me); foxes in the garden (him); the blight on the runner beans and the infuriating speed of pigeons. Also, we’re both coming down off steroids. That may be a thing.

Today’s one of those time-hinge days. Summer’s at the wane.  Sunflowers nod to a listless breeze of dust and memory. In the bathroom, I’m humming that Joni Mitchell song. I do not like the slide into winter – the rain, the dark, the colds and asthma. They are not the worst things in the world to suffer but somehow a time-hinge day like today -fleeting sun, bronze light and shadows – fills me with dread and longing. To have summer over again, just this once. 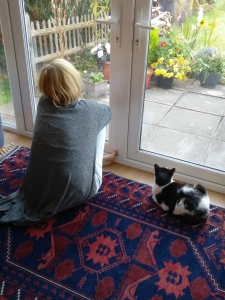 Yesterday I read about the world’s oldest man who lives in Indonesia and is 145. 145!! Apparently he just wants to die. All of his children are dead as well as his 10 siblings and he now has great-great grandchildren. He’s had his own grave ready since he was a spring chicken,  of 121. Imagine having gone to all that effort and to still be here 24 years later. You could have travelled the world, studied for a degree or two, read the complete works of William Shakespeare and still have a few years left to put your feet up and do the crossword. (Note to self: Do not waste money on a grave until you know you’re dead.) He attributed his long life to one thing alone – patience. Imagine seeing 145 winters, 145 Christmasses, 145 New Year’s sales – you’d need patience…

We went to the coast to squeeze the juice out of the last day of summer.

The beach was half empty. The sun was steady, the water glistened. We sat above a tide mark of salt-crust seaweed, determined to store up gold for winter. Lying down, we literally sucked sunshine from the sky until we were plump and gasping. Then we had a cup of tea.

What is it about ‘the big, blue wet thing’? Why are we compelled to sit by it, stare at it, bathe in it, walk by it for hours on end? Watching the people around me, sleepy in that late afternoon echo-beach way, I decide it’s because it satisfies all of our senses. We love its colour, its texture, its smell and the curious rhythm of the waves. Of course we don’t taste it, but there’s a range of man-made add-ons here – chips, cups of tea, ice cream.

But there’s something else, something infinitely appealing about standing on the edge of an island looking out. Behind is land,  safety. Ahead is water, then a new place. When you get to the end of the land, you’ve come as far as you can without being somewhere else. And you can’t just drift into that. You have to get on a boat, or a plane or a train through a tunnel. You have to move.  I look out across the strip of water and I remember the old excitement I used to feel in my teens, hitching round Europe – the scent of adventure, the pull of the new. I hope I still have that when I’m 145.

Joni Mitchell is still singing*. The cat and I ignore her. We give one last sigh at the state of the world, and look down the moment at our lives. We say a polite goodbye to summer. Because when you get to the end, you’ve come as far as you can without being somewhere else.

8 thoughts on “Time-hingeing and the end of summer”